Ramos' goal from the spot against Getafe hands Real Madrid their sixth successive win, as they keep a third clean sheet in a row.
Alfredo Di Stéfano

0
Real Madrid got the better of Getafe and took advantage of their chance to extend their lead over Barcelona at the top of the table. The LaLiga leaders are now four points clear of their nearest challengers, with goal average also in their favour. The Whites picked up their sixth consecutive win this evening at the Alfredo Di Stéfano, following a fantastic last half an hour topped off by Sergio Ramos' goal from the spot after Carvajal was brought down in the box.

The first half finished goalless despite both teams having chances to score in what was a physical affair early on. The visitors were the first to try their luck when Damián crossed on 9 minutes. Maksimovic flicked the ball on and it came off Etxeita's calf, with only a superb Courtois save preventing the opening goal. The hosts' response came fifteen minutes later when a Mendy cross was met by a stretching Vinicius Jr., who forced David Soria into a fine stop.

Varane forced from the field
In the first hydration break, Militão came on in place of Varane, who had to be withdrawn with a knock. The last move of note in the first half came courtesy of Isco, after Ramos' ball over the last defender had got him in behind, but Soria turned the midfielder’s acrobatic attempt behind for a corner.

There was no change to the script after the interval. Getafe continued with their high press, whilst Real Madrid kept on probing in search of a way through the visitors' backline. The hosts very nearly made the breakthrough on 58', when Luka Modric's long-range effort took a wicked deflection off Jaime Mata and almost caught Soria wrong-footed.

Third straight clean sheet
Zidane introduced Marco Asensio, Rodrygo and Fede Valverde in place of Isco, Modric and Vinicius Jr and Real Madrid were now looking more of an attacking threat. In the 78th minute, Dani Carvajal was upended in the box by Mathías  Olivera. Ramos, who has converted each of his last 19 penalties, made no mistake from the spot to seal a sixth win on the spin. That's how the game ended as Madrid recorded a hard-fought victory in which Thibaut Courtois registered a third consecutive shutout. 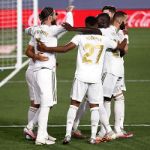