Casemiro got the goal to beat Espanyol after a spectacular back-heeled assist from Benzema to go two points ahead of the second-placed team.
Estadio RCDE Stadium

1
Real Madrid picked up their fifth consecutive win over Espanyol and move two points clear at the top of LaLiga with six games to play. Casemiro's goal on the stroke of half-time was decisive, but the back-heeled assist from Benzema will live long in the memory.

The match started at a furious pace with the first chance falling to the home side after a quick counter-attack that ended in Darder's shot from the penalty spot coming off Carvajal. Five minutes later Casemiro came very close to catching Diego Lopez out of with an effort from inside his own half. The chances kept coming and it was Casemiro again with 10 minutes on the clock who struck the ball well with his left foot, and Ramos also came close with header that just missed the target. Espanyol's response came in the 24th minute. Wu Lei came up against Courtois but his effort went high over the target.

Benzema's work of art
Real Madrid were on top and it seemed that the opening goal was just around the corner. Benzema tried his luck from inside the box with a beautifully struck shot that forced Diego Lopez into a save in the 36th minute. The goalkeeper was again called upon in the 44th minute when he kept out a Hazard volley from the penalty spot after a series of deflections. But a minute later, the move that changed the game came. Ramos headed the ball on to Benzema inside the box. The Frenchman, with his back to goal, showed a moment of genius, picking out Casemiro with a delightful back heel between the legs of Bernardo in to the path of the Brazilian, who put the Whites 1-0 up.

The goal really rocked Espanyol and added an air of calm to Real Madrid’s play. They came close to adding to their lead after the break when Isco crossed for Benzema on 51’ and the Frenchman nearly surprised Diego López at the back post with a difficult volley. Minutes later, Zidane brought on Vinicius Jr. and Rodrygo in place of Isco and Hazard.

Second successive clean sheet
Real Madrid remained incredibly disciplined and managed their lead well to the end, barely giving their opponents any chance at all, and showing why they have conceded the least goals in LaLiga and are the competition’s top side on the road so far. They finished the game with a clean sheet for the second match in a row and now have 6 finals left to play. 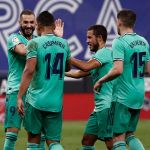