0
Real Madrid show no signs of slipping up in their quest to clinch the LaLiga title. The team picked up a fourth consecutive win against Mallorca this evening to continue their 100% record since the competition's resumption. Vinicius Jr.'s first-half goal and a wonderful Ramos free-kick after the break were enough to send Real Madrid back to the top of the table. Seven finals now remain in the race for the trophy.

Zidane sent the team out with four forwards in the line-up: Hazard, Bale, Vinicius Jr. and Benzema. His gamble came close to paying off inside the first seven minutes with a quick double chance. Mendy crossed, Benzema controlled on his chest in the box and his volley was parried by Reina, who then reacted spectacularly to keep out Bale's effort from the edge of the area. Three minutes later and it was Mallorca's turn to try their luck with a long range Baba strike, which Courtois stretched impressively to turn over.

Best spell for the hosts
From then on, Madrid enjoyed their most dominant stretch of the game, going ahead on 19’. Modric spotted Vinicius Jr. getting in behind, and he controlled the ball before beating Reina while off balance, dinking the ball to the only place the keeper couldn't get it. The Brazilian got in between the lines again five minutes later, and the swift, silky move deserved a better finish. Hazard backheeled the ball to Benzema, who found a fine pass to Vinicius Jr, but the forward's chip from the edge of the box came back off the crossbar.


The second half followed the same script. Real Madrid dominated, looking to extend their lead, and they could have done so in the 52nd minute with a left-footed strike from Benzema, had Reina not been so alert. The goal did come four minutes later, through a superb Ramos free-kick. The captain, who has scored in three of the last four games, sealed yet another fine win for the Whites.

Clean sheet
The team kept another clean sheet, having conceded only two goals in the last four games, and controlled the match until the end as Zidane made changes in order to spread the workload out amongst his players. On Sunday, it's another final for the league leaders when they visit Espanyol 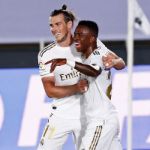