Real Madrid C. F., its president and board of directors are deeply saddened by the passing of Ico Aguilar, an iconic player who represented the club between 1971 and 1979.

Real Madrid wishes to express its condolences and sends it love and warmest wishes to his wife, Eva; his children Daniel and Virginia, his grandchildren Belén and Rodrigo and all of his family and loved ones.

Aguilar made 190 appearances, scored 50 times and lifted five LaLiga titles and two Spanish Cup crowns during his eight-season spell at Real Madrid. He was capped by Spain.

Aguilar passes away at the age of 71. The club passes on its condolences on behalf of the whole Real Madrid family. 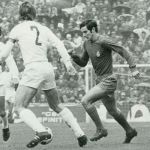