Goals for Vinicius Jr. and Mariano give the win to the Whites, who beat Barcelona thanks to a great second half.
Estadio Santiago Bernabéu

0
Real Madrid won a vibrant Clásico and regained the lead in LaLiga. The Whites beat Barcelona thanks to a great second half performance, in which goals from Vinicius Jr. in 71' and Mariano in 92' secured all three points.

In the first half there were chances for both teams. Real Madrid were the first to fire a warning shot in the sixth minute, but Benzema's volley inside the area went over. Griezmann hit back, but his effort in the 21st minute was also off target. The high press from the Whites hurt the visitors, who were trying to counteract it with very long periods of possession in search of space. Arthur found it in the 34th minute, but Courtois came out on top in the one-on-one.  The last dangerous move of the first 45 minutes came shortly after. Busquets' pass in behind the defence picked out Messi who was inches ahead of Varane, but Courtois turn his shot away.

The second half was dominated by Real Madrid, and on 56’ they got their best chance of the night thus far. Isco got the ball on the edge of the box, and sent in an curling shot that forced Ter Stegen to make a wonder save. These were some of the best minutes for the home side, as they penned their rivals in and showed real signs of danger. Carvajal crossed  on 61’ and Piqué had to make a goal-line clearance following Isco’s header which was sailing beyond the reach of Ter Stegen. Three minutes later he got the ball for the madridista on the right-hand side and fizzed in a cross for Benzema who narrowly missed the target.

The minutes went by and Real Madrid got closer to goal. Braithwaite came on for the visitors and sailed down the right wing on 70’ before testing Courtois in a one-on-one. Just a minute later the madridistas got their first goal. Kroos saw Vinicius Jr. lose his man and get between the lines. The Brazilian got past Piqué and then beat Ter Stegen to bury the ball. The hosts were finally on top on the chances kept coming right to the last when Mariano came on at the death. In minute 92 he killed the tie altogether as he beat Ter Stegen with a splendid finish to help Real Madrid get back to the top of the table. 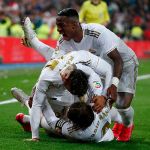