4
Three years after their last visit to Pamplona, Real Madrid came away from El Sadar with the job done. The league leaders recorded an important victory in matchweek 23 of LaLiga. Zidane's side were forced to come from behind after Osasuna got the opening goal, which made for a great first half. Isco and Sergio Ramos, also in the first period, and Lucas Vázquez and Jović in the second, scored the goals for the Whites.

Osasuna made it difficult for Madrid, who had a hard time getting into the game, and in the first three minutes looked to play in behind the Real Madrid defence, forcing Courtois to intervene against Ruben Garcia before the home side took the lead.  It was in the 13th minute thanks to a good header by Unai García from a corner.  The goal shook up the league leaders, and they started look dangerous.  First Benzema pulled the keeper out of position and his shot was cleared by the defence from the edge of the box, and then Bale sent a cross from Carvajal into the side of the netting.

Stamp of authority
Within half an hour of the game Zidane's side were in charge.  They played through the intense press, keeping possession and in a matter of five minutes they turned the game around.  In the 33rd minute, Isco equalised with a delightful volley, and in the 38th minute, Modric took a corner towards the far post, where Casemiro headed back to Sergio Ramos, who made it 2-1.

With the events of the first half fresh in their minds, the Whites came out in intense fashion after the break as they attempted to add to their lead. Modric popped up on the right flank and fed Benzema inside the area, but his effort was snuffed out by the hosts’ defender. The play continued though and Croatian midfielder then went down looking for a penalty after a coming together with Estupiñán.

Sealing all three points
Osasuna refused to lie down and enjoyed some of their best opportunities, again from corners, but the madridista dug in well. Lucas Vázquez (71’) and Vinicius Jr. (82’) came off the bench, and it was the Galician ace who put the result beyond doubt on 84’. Madrid sprung a swift counter led by Benzema, who waited for the onrushing Lucas, and his shot across goal was good enough to beat Herrera. In time added-on, Jović made it 1-4 final. It’s another three points for the LaLiga leaders, who restore some confidence at a difficult place to come. 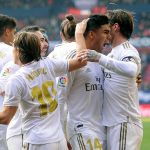