Goals by Bale, Brahim and a Góngora own goal, gave Real Madrid the win over Unionistas, and they'll discover their next opposition on Friday.
Las Pistas del Helmántico

3
Real Madrid made sure there would be no upset on their Copa del Rey debut this term, clinching a place in the last-sixteen with a win over Unionistas de Salamanca in a game where they looked solid from the off. The Whites are now unbeaten in 18 matches, having gone ahead here after just 18 minutes. James crossed into the box, Góngora headed the ball away, but it fell to Bale, who controlled on his chest, before his vicious right-footed strike took a wicked deflection off Guille Andrés to beat Brais. A minute later, Góngora responded with a fierce effort from the edge of the box but Areola's outstretched hand turned it behind.

Chances
Real Madrid had the game under control now, and were enjoying opportunities to extend their lead before the break. Benzema tried his luck with a great individual move on 35’, but the ball ended up in the side-netting. Two minutes later, James played a neat one-two with Casemiro, and beat Brais with a sumptuous chip, but the crossbar ensured the visitors did not increase the deficit.

The second half got under way with more chances. Bale crossed with his right foot in the 49th minute, Vinicius Jr. laid the ball on to the penalty spot with a beautiful back heel, Benzema helped it on for James arriving from deep to hit the target, but Brais was able to keep it out.  When it looked like a second goal for the Whites was only a matter of time, Alvaro Romero, who had just taken to the field, equalised in the 57th minute.

Brahim
Real Madrid
got back on track five minutes later.  Marcelo crossed and Brahim, who had come on to replace Bale, got on the end of it at the far post and Góngora, at full stretch, turned the ball into his own net as he looked to clear.  The home-side's reaction was instantaneous and De la Nava had the chance to equalise in the 65th minute, but he shot straight into the hands of Areola. The Madrid players did not want any more scares and were creating more and more chances in the Unionistas' area. Bad luck prevented them from getting the third with 85 on the clock - a powerful shot from Brahim hit the post, Carvajal picked up the rebound, crossed and Brais denied Vinicius Jr., but the ball fell to Jović, who smashed it on to the woodwork. In injury time, Brahim made it 3-1 following an individual move. Real Madrid will now wait to discover their last-sixteen opponents. 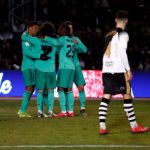