The Whites got the better of Sevilla in the first game of the second half of the season with a brace for the Brazilian.
Estadio Santiago Bernabéu

2
1
The Santiago Bernabéu hosted its first clash of 2020 as Real Madrid got the second half of their LaLiga campaign underway. It was an evenly-matched affair throughout against Sevilla, with both teams putting on a display befitting of their lofty league positions. Following a goalless first half, Casemiro twice put the Whites ahead to clinch all three points and place Madrid provisionally top of the pile.

The game kicked off with real intensity as neither side seemed able to exert control over the centre of the pitch. Rodrygo was the first to get in behind the Sevilla lines, laying the ball back to Jović, whose shot was charged down by a defender. Kroos recorded the first effort on goal in the 11th minute as Madrid slowly eased their way into the clash. Lucas Vázquez and Carvajal were looking dangerous down the right flank and Casemiro tried to catch Vaclik out from distance in a repeat of last season's strike.

Casemiro steps up
Sevilla then looked to have taken the lead when De Jong rose highest to meet a corner, but the referee ruled the goal out following a VAR check. This proved a shot in the arm for the visitors, who rained down a series of dangerous balls on Courtois' area, but they found nobody to get on the end of them. The start of the second period was somewhat disjointed amid several fouls which disrupted the play. That was, until the 57th minute, when Casemiro popped up in the box for the first time to put the Whites in front. He latched on to Jović's sumptuous back-heel and lifted the ball beautifully over Vaclik to make it 1-0.

Zidane then turned to Karim Benzema and Vinicius Jr. in place of Rodrygo and Jović. In his very first involvement, the Brazilian ran at the visitors' defence and fired in a shot towards Vaclík's far post. In the 63rd minute, the Andalusians levelled through Luuk de Jong, despite Munir twice handling in the build-up. After consulting the VAR system, the referee awarded the goal.

Casemiro strikes again
You can always rely on Madrid to stand up and be counted when adversity strikes and it took the Whites all of five minutes to regain their lead. As the hosts poured forward, Lucas Vázquez sent in a pinpoint cross from the right flank and Casemiro stole a yard on the defenders to leap highest and make it 2-1 with a powerful downward header.

The team settled after the goal and saw out the rest of the game to secure a crucial win. Luka Modric came close to adding to the lead on 82', when he let fly from range and Vinicius Jr. was a constant threat down the left. Toni Kroos could have put the result beyond all doubt in the 87th minute but Vaclík saved his side from further woe. This win temporarily puts Madrid top of the LaLiga standings. 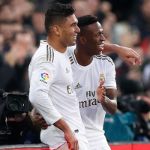