Rudy, with a stellar second quarter (17 points and 5 triples), and Thompkins (20) turned the tide in a tough game against Zalgiris. The Whites have equalled their best ever winning run in the competition.
WiZink Center

Real Madrid have drawn level with another record which seemed almost unattainable, and they've done so in the most hotly-contested Euroleague campaign in living memory. With a win over Zalgiris Kaunas at the WiZink Center, the Whites picked up a thirteenth successive win, matching their streak from 2013/14. Rudy was the key man with a memorable second-quarter performance that saw him post 17 points and 5/7 triples. Faced with the significant absences of Llull, Randolph and Deck, the man from the Balearic Islands came to the fore for Laso's side once again, assisted by Thompkins (20 and 21 PIR) and another 3 players managing double figures (Campazzo 12 and 8 assists; Mickey 13; and Tavares 10). The madridistas finish the night as sole leaders.

Zalgiris pressure on the ball caught Madrid off guard with their three tall men in the starting five (Thompkins, Mickey and Tavares) and it took them over three minutes to really get their heads in the game. By then, the visitors were already 2-8 up. Laso called a 3-2 zone and his charges began to find points from the 6.75. This combination yielded an 8-0 run to wrest the initiative from the opposition. Mickey (8 points) and Thompkins (5 without a miss) led from the front, while Walkup was the antidote for the Lithuanians (7) and the first quarter finished in even fashion (20-18).

Rudy continues his fine form
The Balearic Islands-born forward gave Real Madrid their first real run, enjoying a spectacular second period with 17 puntos (emulating his quarter against Baskonia in last year's fourth league final clash). He had scored 12 triples in the last two games, and swiftly added a further 5 to that tally inside the next 10 minutes to take his team's lead to beyond ten points (40-27, min. 17). The WiZink were revelling in the exhibition, added to by a superb double-handed dunk by Taylor. But Zalgiris had Lekavicius in fine fettle (16 points in the quarter) to ensure they didn't lose sight of the game, as Landale was his able assistant. The hosts were +7 at the break (47-41).

Jasikevicius' men continued their disciplined, aggressive play after the restart, not allowing Real Madrid to kill the game off. Campazzo, Thompkins and Tavares maintained the Whites' 7-10-point lead, despite Walkup's relentless efforts and KC Rivers stepping up for Zalgiris. Laso's men won the period once more (21-18) but the opposition continued to hang in there (68-59, min. 30).

Hard-fought victory
Real Madrid could not cut out what had been their only issue all evening - turnovers. Zalgiris made the most of the fact, with former madridista KC Rivers bringing his new side right back into the game (75-69, min. 35). That's when the hosts showed cool heads to ensure the visitors would not complete the comeback. Garuba brought energy to the defense and the team were glad of it. They were moving the ball well up top, and Campazzo came close to a double-double with 8 assists, finding the duo of Mickey and Thompkins. The latter once again showed off his tremendous quality to mitigate the team's injury problems. He sunk two consecutive triples to lead an 8-0 run which was finally enough to down a resilient Zalgiris (88-82). Estudiantes, CSKA and Khimki are the next three rivals inside 5 days. 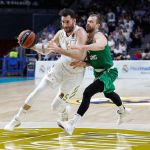