3
Real Madrid have clinched their place in the Spanish Super Cup final, where either a derby, or a Clásico clash awaits. The stage is set for Sunday evening, when the madridistas will battle it out to lift the trophy, which would be the eleventh in their history, the first under the new tournament format. All that comes after a convincing win over Valencia in the semi-finals, as Zidane's men were dominant from start to finish, making their superiority count with a sublime Kroos strike, another by Isco and a lovely Modric effort.

Madrid took charge of the ball from the early stages. Casemiro and Valverde both tried their luck from outside the box, but it was Varane who had the best chance to open the scoring when his point-blank header was kept out by Domènech. With 15 minutes gone, the goal was already well deserved, and Kroos duly obliged, making it 0-1 with a superb strike. As ever, the German strolled over to take the corner in search of a teammate to head home, but this time he saw the goalkeeper off his line, and made a snap decision to shoot. His impudence paid off, rewarding him with a truly unforgettable goal.

Superiority
With the scores now against them, Valencia had to push on, and Gameiro had a good chance with half-an-hour gone. It was fleeting though, as Zidane's men continued to dominate the tie, and it wasn't long before the second goal did arrive. Isco (39’) was sharpest in the box to finish off a move crafted by Valverde, Carvajal and Modric. The Malaga-born ace then had a chance to double his tally, but his header came back off the post. The next move saw Domènech called into action to save against Jović and ensure his team weren't further down at the break.

The game stayed much the same in the second half, and Isco had another chance to complete his brace after some great individual skill on 57’. After that, it was Valverde, whose shot ricocheted off the crossbar. Real Madrid now had upwards of 60% possession, making sure they got the ball back quickly, getting it up the pitch in a bid to kill the game off entirely.

Modric shows his class
To make it 0-3, Modric got into the box and flicked in an unbelievable curling shot with the outside of his right boot, well beyond the reach of the Valencia goalkeeper. Marcelo (71’) and James (77’), both came on to see out the game for the Whites, which was all but over when Parejo fired in a penalty to spare his side’s blushes. Now the team await the other semi-final result to see whether Barcelona or Atlético will be their rival for the title. 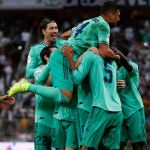