The Croatian had the following to say after picking up the award: "I'm really happy and it's an honour to be collecting this award. Some great players have won it in the past and winning it fills me with great pride". The Golden Foot has been awarded annually under the patronage of Prince Alberto since 2003. The nominees are chosen by a jury of representatives from specialist media outlets from across the world and the winner is decided by an online vote. 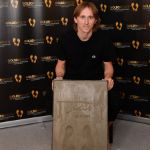