The 26-year-old goalkeeper, who joins the club from Paris Saint-Germain, has a World Cup winners' medal to his name.
Alphonse Areola (Paris, France, 27/02/1993) has become Real Madrid's latest signing. The 26-year-old custodian checks in from Paris Saint-Germain, where he helped the club to 11 pieces of silverware in recent seasons. A senior international with France, he was part of the World Cup-winning squad at Russia 2018.

Areola learned his trade at the PSG academy and went on to make his first-team debut in the 2012/13 campaign. He then moved to Lens, where he clinched promotion to Ligue 1 in 2013/14 after being named the best goalkeeper in Ligue 2 by the UNFP (National Union of Professional Footballers). After turning out for Bastia in the top flight in the 2014/15 season, he made the move to Spain. He enjoyed an excellent year with Villarreal in the 2015/16 season, playing a key role as the team reached the Europa League semi-finals and sealed a fourth-place finish in the league. He also smashed the club's record for the longest period without conceding a league goal, after going 620 minutes unbeaten.

In the 2016/17 season, he returned to PSG, where he made over 100 appearances and secured three league titles, two French Cup crowns, four Super Cups and two League Cups. Alongside this success at club level, he also captured a World Cup winners' medal with France in 2018 and the World Cup Under-20 crown in 2013. In this latter final he grabbed the headlines after saving two penalties in the shootout as France prevailed over Uruguay. 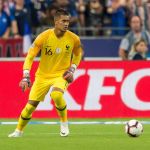