"You'll always be a symbol and iconic figure for Real Madrid and within basketball", declared the madridista president.
Discurso íntegro de Florentino Pérez en el homenaje a Pedro Ferrándiz
The figure of Pedro Ferrándiz, who coached Real Madrid's basketball team for 14 seasons and guided the side to four European Cups, 12 league titles and 11 Copas del Rey, took centre stage in the second instalment of the 'Campo a campo' sports forum at the La Mediterrània auditorium in La Nucía, Alicante.

Club president Florentino Pérez was tasked with bringing the curtain down on the tribute to the club's honorary member: “Pedro Ferrándiz is, and will always be, a symbol and a unique role model at Real Madrid and within basketball. Within madridismo you're one of our big legends on account of your triumphs, trophies, personality and the indomitable spirit that ran throughout your teams. Basketball is your religion and you conveyed that to your players".

Innovator
"As a fan, I was lucky enough to experience and enjoy the amazing revolution of a man who was ahead of his time, who guided Real Madrid from the bench, smashing record after record and creating some historic emotions. One thing that particularly excited me was his audacity. He was the first coach who managed to go to the United States and bring the first big American star to Europe. The legendary Hightower helped us to reach the final of the European Cup, which we had never reached before".

Role model for madridismo
"Your legacy is unrepeatable. On behalf of madridismo, I today want to thank you for all that you have given us and for acting as a symbol of commitment, character, winning spirit, brilliance and passion. It makes me proud to continue to further build on the basketball that you created within madridismo. You're aware of the admiration, respect and massive affection that I have towards you for everything that you gave to Real Madrid. For the madridistas you represent our club's best values and the best values of the sport".

"Your career represents an example to everyone and you're one of the most influential figures within world basketball. That explains why your name features amongst those within the FIBA's Basketball Hall of Fame and the United States Hall of Fame. All of the recognition you've received is fair and deserved. However, I'm sure that today comes with different feelings and emotions for you. Because today's is a tribute from your homeland and your people. You've become an iconic figure within our basketball because you changed the history of this marvellous sport. For us you'll always be our eternal coach".

Club honorary member
"Today we're remembering those unforgettable times, such as the brilliant creation of that historic own basket, which forced a change in rules to be introduced or when you took to the opposition's floor and went to the middle of the court to take in the opposition fans before tip-off. As Real Madrid president, I today also remember how our club's board of directors recognised you as a Real Madrid honorary member in what was also a very exciting day for us all"

The moving ceremony got under way with the premiere of the documentary Pedro Ferrándiz, the Legend, before the forum, which featured contributions from other leading figures with Real Madrid's basketball team, such as Emiliano Rodríguez, Juan Antonio Corbalán and Vicente Paniagua began. It's worth remembering that fellow former Madrid player Antonio Díaz-Miguel and Ferrándiz are the only Spanish players to feature in the Naismith Memorial Basketball Hall of Fame. 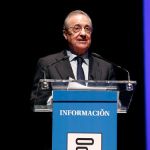