A superb piece of place saw Marcelo score a fantastic goal, and Casemiro headed home for the madridistas at the Olimpico.
Olympic Stadium

2
Real Madrid drew their final preseason clash against Roma before running out winners on a penalty shootout in the first Mabel Green Cup. Marcelo finished a superb piece of play before Casemiro turned in a wonderful header for the madridistas' goals, after the hosts had enjoyed a several chances to open the scoring. They hit the post twice, once from an Under effort on 8’ when one-on-one with Courtois, and the madridista keeper kept out a Zaniolo strike on 10’ before displaying all of his class to palm a Perotti shot wide three minutes later.

From then on Real Madrid started to look dangerous. Casemiro fired off a warning shot on 15’ and just a minute later, the moment of the game arrived. A sublime move from Modric, taking the ball with his back to goal, turned with his first touch and laid the ball to Marcelo with his second.. The Brazilian did the rest, cutting inside on the edge of the box and unleashed a superb effort to beat Pau Lopez.

End-to-end
The hosts respond quickly and levelled on 34’. A fine Zaniolo move saw him steam down the right and pull back for Perotti to net. That was the trigger for a crazy spell of play which yielded chances for both sides. The visitors were the first to strike, in a reflection of the intention of Zidane's team. The goal came on 39’, as a corner came back to Marcelo, who whipped it back in for Casemiro to head home. The joy was short-lived. The very next move saw Dzeko make it 2-2 before the break.

Zidane  brought on Jović and Vinicius Jr. for Nacho and Valverde in the second half. Benzema then led the first dangerous move in the 47th minute, his curling shot from the edge of the area flying just high. Jović then pounced to go through one-on-one with Pau López, who came out on top. The Serbian striker looked sharp, creating another chance to put the Whites ahead a minute later, but the hosts' goalkeeper again won the battle on 77’.

Chancer for the visitors
Real Madrid were now causing real problems for the hosts. Vinicius Jr. tried his luck on 80’ but again found Pau López behind his superb strike. Three minutes later, Isco started a counter-attack but Bale's effort ended up in the side netting. The Welshman then had a fine chance to decide the game in the final seconds, but his shot flew just wide. Roma then clinched the first Mabel Green Cup on a penalty shoot-out. 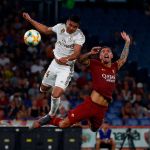