Benzema put the Whites ahead with a stellar goal but Guardiola pulled the visitors level on 88’.
Estadio Santiago Bernabéu

1
Real Madrid drew with Real Valladolid in their first game of the season at the Bernabéu. The Whites deserved the win and dominated the game, creating multiple scoring chances. They scored on 82’ thanks to some sublime Benzema skill, but Guardiola levelled the tie on 88 minutes to rain on the madridistas' parade.

The home side had their first scoring opportunity around the fifteen-minute mark as James crossed in for Bale whose shot with the outside of the foot went wide by mere centimetres. Seven minutes later, Marcelo and Kroos were in the mix for the corner before James took a shot from the edge of the box which ballooned wide. The visitors' most dangerous chance came on 45 minutes through Óscar Plano, but he blasted a shot over the bar.

More chances
Real Madrid's next attempts on goal were both headers. Benzema rattled the crossbar on 24’ before Bale tried his luck ten minutes later, only for the ball to end up in the hands of Masip. On 36’, James had another golden opportunity with a long-range shot, and two minutes after that close call, it was Benzema who fired an effort straight into the hands of the Valladolid goalkeeper.

Nothing changed after the break. Real Madrid continued to dominate and win back the ball, while Valladolid were pinned in. The chances kept coming as a Marcelo cross found Bale who was unable to find the breakthrough. Zidane brought on Vinicius Jr. and Jović for James and Isco. The Serbian was involved with his first touch. Bale galloped down the flank before crossing just after 70 minutes for an effort that hit the woodwork.

Benzema on fire
It was only a matter of time before the goal came thanks to a moment of magic from Benzema. The Frenchman scored a great goal after 82 minutes with just two touches of the ball. The first to control it on the edge of the area from Varane's pass and then the second was a shot on the half-turn. It looked like it would be a win for the home side, but in the 88th minute Sergi Guardiola levelled things up. 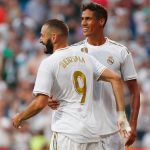