De la Fuente and Javi Hernández also made their first-team bows.
Eden Hazard, Luka Jović, Ferland Mendy, Rodrygo and Kubo made their club debuts in the team's first outing of the pre-season campaign, against Bayern Munich at Houston's NRG Stadium. The Belgian was a starter and completed the first 45 minutes, whilst at the half-time interval, Jović came on for Karim Benzema and Mendy for Marcelo, whilst Rodrygo also replaced Isco, before getting his goalscoring account up and running with a fine free-kick strike. Meanwhile, Kubo entered the fray in place of Toni Kroos.

Bows for academy players
There were also debuts for youth-team players Adrián De la Fuente and Javi Hernández. The Castilla duo were introduced in place of Raphaël Varane and Dani Carvajal and completed all of the second period. 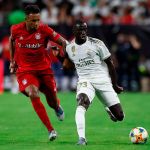