“Real Madrid welcomes one of those rare young talents. A footballer who is already widely admired for his style of play and his understanding of the game”, said Florentino Pérez.
Rodrygo Goes was unveiled as a new Real Madrid player in the VIP box at the Santiago Bernabéu. The 18-year-old forward arrives at the club after enjoying a stellar rise in Brazilian football. The event began with a video displaying some of the player's best moments, before president Florentino Pérez welcomed him to the club: “We will continue to work hard to bring talented players into our squad who dream of hitting the heights in this shirt; special talents who will help us deal with the new age of incredible competition”.

“Our history has been consolidated on the basis of pioneering sporting, social and financial management which have allowed us to recruit the services of the world's best players, the top players in Spain, and boast an academy of which we have always been very proud. Our strategy is, and has always been, to search for promising young talent. It's a strategy which we believe in very strongly and which works through bringing in youngsters with extraordinary futures who dream of defining an era”.

Young talent
“Today, Real Madrid welcomes one of those rare young talents. A footballer who is already widely admired for his style of play, his understanding of the game and his career so far, despite his youth, in a country where expectation and love of football is essentially a lifestyle. He's dreamed of this moment since he first began to kick a ball. Today we are welcoming Rodrygo Goes as a new Real Madrid player”.

“You come to Real Madrid from Brazil, a country whose greatest passion is football. You have learned your trade at Santos, a club which, for those of us who love the game, is a legendary name. Whilst there, you have achieved some remarkable milestones. You made your first-team debut at just 16 and at 17 you became the youngest Brazilian to score a Copa Libertadores goal. You've already made 82 appearances in the legendary Santos shirt”.

Challenge
“But now you are embarking on the challenge you have chosen for yourself. You're coming to a club you love, a Santiago Bernabéu which has already thrilled you and will now support you to ensure you are happy. Hard work, sacrifice and humility will see you succeed here. The fans of this club will be by your side and will give you everything to allow you to succeed and make history here. But you must also understand the level of expectation at our club. Dear Rodrygo, welcome to your new home”.

Rodrygo: “Thank you to the president for his faith in me and to the fans for their warmth”
“Good afternoon everybody. I'm studying Spanish so I'll try to speak a bit. I thank God, first and foremost, for what he's done for my family and I. Thank you to all of my family and the people who have been with me through everything. Thank you, Mr. President, for the faith you've shown in my work, and thank you to the Real Madrid fans for your warm welcome. I hope I can bring you lots of joy. Hala Madrid!”.

Signing the contract
Prior to his presentation, Rodrygo signed his new contract in the stadium's meeting room, alongside Florentino Pérez. Following the signature, the Brazilian forward was presented with a watch, a replica of the Santiago Bernabéu and a shirt printed with his name. 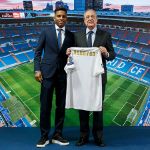