A Ramos brace and goals from Lucas Vázquez and Benzema sealed victory over Girona in a game the Whites could have won by more.

2
Saturday's win over Sevilla set the tone for the games to come and just five days on, Real Madrid put in another convincing display at the Santiago Bernabéu to continue their run of fine football and positive results. The Whites beat Girona 4-2 in the first leg of their Copa del Rey quarter-final to take the initiative in the tie ahead of the return leg at Montilivi next week. Sergio Ramos bagged a brace, while there were also goals for Lucas Vázquez and Benzema in a game which Solari's men could well have won by a bigger margin given their superiority throughout.

The game didn't exactly start as the Whites would have planned, as Girona opened the scoring with their first real sight of Courtois' goal when Carnero crossed from the left and Lozano was on hand to make it 1-0 to the visitors (7’). Madrid would now have to come from behind and immediately began to dominate possession as the chances began to flow. Vinicius looked the most likely for the madridistas down the left-hand side but it was Casemiro and Marcelo who were first to test Iraizoz with long-range efforts. Solari's men merited the equaliser and it duly came when Benzema picked out Odriozola's marauding run down the right and the full-back squared for Lucas Vázquez who ran from deep to level the scores at 1-1 (18’).

Ramos completes the comeback
Far from easing off following their goal, the Whites continued to steam forward. Vinicius forged another fine chance as he cut the ball back to Benzema in a good position, but the forward shot over the bar. The Brazilian was wreaking havoc every time he got the ball at his feet and with 28 minutes gone he nearly came up with a wonder goal, bending his effort from the edge of the box inches wide. Madrid were all over the visits and on 42’ they were duly rewarded. Vinicius was brought down by Lozano in the box and Ramos delivered a panenka-style effort from the spot. Benzema could have increased the deficit before half-time but his shot came back off the upright and it remained 2-1 at the break, despite the deluge of chances for the home side.


The second half picked up where the first period had left off, with Madrid promptly regaining possession and moving the ball around quickly. The home side came close to scoring their third of the night through Modric's headed effort. The Whites were now pouring forward in attack and some fine link-up play between Vinicius and Benzema went unrewarded after the Frenchman's effort was kept out by Iraizoz. Next up, Marcos Llorente and Toni Kroos came on in place of Casemiro and Modric in the middle third. In the 64th minute, Thibaut Courtois palmed a Lozano effort behind after Girona had launched a dangerous counter-attack. From the resulting corner, Llorente handled and Granell converted his 66th-minute spot-kick.

Ramos & Benzema on target
There would still be time for Madrid to go on and claim victory. Solari made his third and final change by introducing Isco for Dani Ceballos. In the 77th minute, Ramos struck to restore the Whites' lead. The captain headed home from Marcelo's cross after the wing-back and Vinicius had combined well down the left. However, Madrid weren't prepared to sit back and three minutes later they made it 4-2 to round off the scoring for that night, with that man Vinicius teeing Benzema up for a tap-in. Madrid will now look to complete the job and clinch their Copa del Rey semi-final spot in Thursday's return leg. 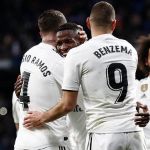