Sergio Ramos, Lucas Vázquez and Vinicius Jr., with a sublime volley, sealed victory over Leganés as Brahim made his debut.
Santiago Bernabéu

0
Real Madrid have carried on their fine form in the Copa del Rey. The Whites have edged a step closer to the quarter-final stage after beating Leganés in convincing fashion, 3-0 at the Santiago Bernabéu. Sergio Ramos tucked home a penalty to bring up his 100th professional goal, before Lucas Vázquez and Vinicius Jr., with a wonderful volley, put the tie firmly in the madridistas' favour ahead of next week's return leg at Butarque. Brahim also enjoyed his first minutes in a Madrid jersey.

Madrid took to the pitch with the intention of dominating the game and attacking their opponents, who were well organised and waiting for their chances on the break. Vinicius Jr. looked the most likely for the Whites early on. A fine move by the Brazilian resulted in a Ceballos shot which was blocked by Cuéllar. Just on the fifteen-minute-mark, Benzema had a glorious double opportunity to open the scoring but was unable to convert. Leganés responded through Braithwaite, the Danish forward causing problems with his pace and aerial prowess.

First goal
With 25 on the clock, Odriozola skipped into the box and was upended, but the referee decided not to put his whistle to his lips. The game was fairly end-to-end at this stage, and just one minute later, Braithwaite raced in behind the madridista defense and shot inches wide. On 36’, the Leganés forward forced Keylor Navas into a fine stop following a corner. Then, as it seemed the teams would head in level at the break, Gumbau brought down Odriozola in the box and Ramos stepped up to convert the spot-kick (44’).

Real Madrid came out after the break in front on the scoreboard and determined to add to their tally. First, Ceballos and then Valverde fired warning shots from outside the area. Next, Vinicius Jr. came close after two nice passages of play down the left. The Whites were playing well and they didn’t have to wait much longer for their goal. In the 68th minute, Benzema picked up a pass that Bustinza had played back, he combined with Vinicius Jr. and the Brazilian set up Lucas Vázquez to make it 2-0.

Vinicius goal and Brahim debut
Real Madrid were not satisfied and continued attacking. With 77 on the clock, came the goal of the match. A great assist from Odriozola was met by Vinicius who connected with a spectacular volley. It was the last action of the match for the Brazilian, who made way for the debutant Brahim. Meanwhile, the chances continued to flow. Braithwaite was again kept out by Navas and Cuellar prevented Isco from grabbing a fourth. The man from Malaga also had a chance in injury time but the game ended 3-0 and Real Madrid will look to seal their place in the quarter finals next Wednesday. 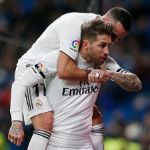