The goals from the Frenchman, who had a spectacular game, and those from Ramos and Bale, gave the Whites the win against Espanyol.
RCDE Stadium

4
Real Madrid have slipped in to cruise control in recent weeks. Not only have they won the last three official matches, but they’ve done so playing exciting and dominant football. Today, the Whites set up a victory against Espanyol with goals from Benzema and Ramos in the first quarter of an hour. The first came with only 4 minutes gone. Modric broke in to the area and released a shot which was parried by Diego Lopez, but Benzema pounced on the loose ball to fire home the opening goal.

The second came just 11 minutes later and was straight off Solari’s tactics board. Kroos took the corner short to Modric, who put the ball to the far post, where Ramos found space to score with a perfect header. The captain netted his third goal in the last two games. Despite the advantage, Real Madrid continued to dominate possession, until, in a rare Espanyol attack, the ball found its way to Baptistao who beat Courtois in the 25th minute, halving the visitors’ lead.

Work of art from Benzema
The home side looked to take the game to the Madridistas but Solari’s men stuck to the task and extended their lead again just before the break. In stoppage time, Benzema combined with Vinicius Jr., who returned the ball to the Frenchman to finish calmly with a side-footed strike past Diego Lopez at full stretch.


Solari was forced to bring Ramos off with a knock at half-time and Nacho came on in his place. The game followed a similar course after the restart and all of the clearest opportunities were falling to the visitors. In what was a truly sublime performance at the RCDE Stadium, Benzema wriggled away from his defender for the thousandth time and laid a perfect pass to Modric on 57’ but the Croatian’s shot from near the penalty spot was saved by Diego López.

Bale back and on the scoresheet
Real Madrid’s pressure continued to suffocate Espanyol, who were struggling to get out of their own half. It was the high press which led to the visitors’ fourth goal as Lucas Vázquez and Nacho stole the ball back from Baptistao on 69’. Having made his comeback from injury with 64 minutes gone, Bale did the rest. He escaped the attentions of Javi López with a fine move in behind and a double heel-flick, before beating Diego López with a shot across goal. One minute later, the hosts’ goalkeeper kept Carvajal from adding to the tally after he’d latched on to another tremendous pass from the inspired Benzema.

It looked as though the game was as good as over, but Real Madrid were then reduced to ten men with 70 on the clock as Varane was given his marching orders. This signalled the start of a better spell for the hosts, who came close to cutting the deficit two minutes later when Sergio García’s shot took a wicked deflection off Reguilón but Carvajal sent the ball off the goal line and out for a corner. Rosales did get one back on 82’, but the madridistas retained their composure to the end to pick up a well-deserved win. 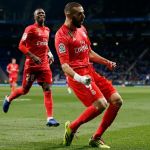