The Whites take on the team from Aragon in a competitive fixture for the first time (Sunday, 4:15pm CET).
Real Madrid have arrived in Huesca ahead of their first ever competitive visit to El Alcoraz on Sunday. The Whites' party, with 19 players in the squad, touched down at Huesca-Pirineos Airport following a flight lasting one hour. The madridistas' arrival was greeted by hysteria among the many fans who had come to see their idols. The players responded to the show of support by signing autographs.

The team then headed to the Abba Huesca Hotel, where they will remain until just prior to the game on LaLiga match day fifteen (4:15pm CET). 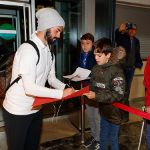