Vinicius Jr. paved the way to victory with a deflected strike which flew in off Kiko Olivas before Ramos made sure of the three points from the spot.
Santiago Bernabéu

0
Real Madrid managed a win against Real Valladolid at the Santiago Bernabéu. The Whites desperately searched for a goal throughout the encounter and found the well-deserved victory in the final ten minutes. Vinicius Jr. showed speed and skill to set the Whites off on their way to a win, firing in off of Kiko Olivas on 83’ and Sergio Ramos was on hand to make it 2-0 with the penalty that came on 88’.

Real Madrid had their eyes set on a win from the off. Benzema fired the first warning sign, after Asensio set him up, firing just past Masip. Reguilón was the madridista who proved most incisive. He sent in countless right footed crosses for Bale and Benzema who struggled to find the back of the net. Casemiro tried his best in the air. Real Valladolid, were sharp and looked it at the end of the first half. Antoñito tried a chipped shot and Enes Ünal headed into Courtois. It was 0-0 at the break, but Bale had a good chance, heading Asensio's cross wide.

The second half got underway as a far more open game. Real Madrid continued to attack down the wing led by Reguilón but were struggling to break down the well-drilled Valladolid defence. With 55 on the clock, Casemiro tried his luck from long range but Masip did superbly to keep him out. Alcaraz produced an instant response with a vicious strike which struck the bar. Solari shuffled things around, calling on Isco in place of Casemiro. As they streamed forward in search of the winner, Madrid began to take risks at the back and inevitably conceded chances to the visitors. Toni Villa could have put his side in front but for a Courtois before the forward smashed another effort on to the crossbar.

With less than 20 minutes to go, Lucas Vázquez and Vinicius Jr. joined the madridista attack. The Whites were insistent down the wings and from set pieces, but the goal just wouldn’t come. Courtois was once again called into action to stop a long-range Verde strike. Then, on 83’, Vinicius led a move which would set the madridistas on the road to victory when he stood up the visiting defender, cut inside the box and unleashed a powerful drive which deflected off Kiko Olivas on its way into the back of the net. With 88 minutes gone, Ramos stepped up to convert a penalty for a foul on Benzema which sealed the win. A 2-0 on the night as attention now turns to the Champions League midweek. 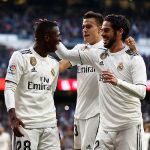