Cristiano Ronaldo won the Club World Cup Silver Ball.
Luka Modric has been awarded with the 2017 Club World Cup Golden Ball. The central midfielder was the man of the match in the semi-final against Al Jazira, played another brilliant game against Gremio and led the team to victory. Cristiano Ronaldo, who scored in both games and was man of the match in the final, won the Silver Ball. Lastly, the Pachuca stalwart Jonathan Urretaviscaya won the Bronze Ball.

The Croatian showed his gratitude for the awards after the game: “Thank you, it means a lot on a personal level and for the team. We've won another title, the fifth this year. It's been a perfect year and we're very proud to have picked up another trophy, and I in particular, for winning the tournament's Golden Ball. But the most important thing is that we've been able to lift the cup”.

Fine form
“It's difficult to be aware of it, but when you're on the inside, playing every day with so many games… when all this comes to an end, we've going to look back on this year with pride and we'll be very happy. It's been a great year for me. I could say it's been the best year of my career and that means a lot. It's reward for the hard work and dedication every day and when other people show they value it, that makes you very proud. I want to keep giving my all for this shirt and if possible, win many more titles”.

Challenges
“Our next challenge is to continue winning titles. We've got a great chance to cut the deficit on Saturday. We're on a good run, we believe in what we're doing, playing better and I hope we can show that against Barcelona as well”. 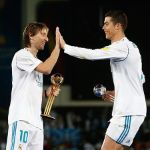