The Croat, who came in ahead of Bruno Soriano (Villarreal) and Sergio Busquets (Barcelona), expressed his satisfaction upon collecting his accolade: "I'm really honoured to receive this award. Thank you to LaLiga, everyone who voted for me and to my teammates, who deserve real credit for this award".

Best Newcomer
Marco Asensio saw off competition from Saúl Ñíguez (Atlético Madrid) and Mikel Oyarzabal (Real Sociedad) to scoop the distinction as Best Newcomer. Speaking after picking up his award, the madridista has the following to say, "Thank you to LaLiga for this accolade and to everyone at Espanyol for the year that I had there and, in particular, to my teammates, who helped me a great deal". 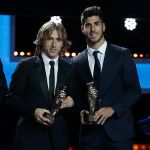