Thousands of supporters were on hand to greet the players upon their arrival at the Santiago Bernabéu.
The players had called for support and the fans certainly didn't disappoint. Thousand of madridistas gathered in the streets around the Santiago Bernabéu to welcome the team. Supporters congregated in the Plaza de los Sagrados Corazones in spite of the rain, to offer their encouragement to a squad that is bidding to produce a comeback. The highlight came when the bus, which had departed from the team's Real Madrid City residence - where the Whites have received a send-off from the members of the Cadete B squad - reached the stadium. 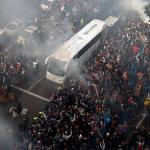