The Frenchman's goals in San Mamés sealed a fifth straight win for the Whites, who remain unbeaten.
San Mamés

2
Real Madrid's winning streak shows no signs of stopping. The team are fired up and remain unbeaten after six competitive fixtures. It is when things are at their most difficult that the Whites show just what they are made of. In San Mamés, one of the trickiest away grounds in the division, Real Madrid recorded their fifth straight victory courtesy of a Karim Benzema brace. Rafa Benítez's side's excellent response was rewarded: the Whites now sit top of La Liga, level on points with Celta Vigo and Villarreal, albeit with a better goal difference.

The team held their ground extremely well and neatly played the ball out from the back. The players enjoyed a lively first half and were able to hold firm when the win looked under threat. The visitors' first chance on goal came in the 14th minute. Cristiano Ronaldo provided a headed assist for Benzema but the Frenchman's acrobatic effort went over the bar. That was just a taste of what was to come. The deadlock would be broken shortly afterwards, in the 19th minute. This time, a very alert Benzema made the most of a poor back pass by San José to tap the ball into the back of the net.

This was Real Madrid's best spell of the game, and they almost doubled their lead, first through a Cristiano Ronaldo volley that Iraizoz managed to keep out at the expense of a corner in the 22nd minute, and then through a Toni Kroos effort from outside the box that went inches wide of the mark in the 28th minute. After that, Athletic Club, propelled forward by their supporters, came into the game and anything could have happened before the half-time whistle. Keylor Navas and Iraizoz kept things as they were with two sensational saves, with the former keeping an Artiz Aduriz header out in the 41st minute and the latter denying Mateo Kovacic in a one-on-one situation a minute later following a fantastic counter-attacking move by the visitors.

Athletic equalised
Things began very differently after the break. The high tempo and excitement that defined the encounter during the opening 45 minutes gave way to a tense second half with a lot of fouls. Athletic pressed high up the pitch and started to threaten Madrid's goal more often. An Aduriz strike on the edge of the box forced Navas into another reflex save in the 50th minute. However, the Real Madrid goalkeeper was unable to do anything about Sabin Merino's headed goal in the 67th minute.

Immediate reaction
Things were all square with just 20 minutes to go, but the home team's joy was short lived, lasting just three minutes to be exact. That was all the time needed for Luka Modric to find Isco on the wing and for the Andalusian to then conjure up a perfect cross towards an on-rushing Benzema to make it 1-2. A brace for the Lyon native, who once again underlined his exceptional run of form.

Madrid were tested again after that, but Athletic Club were unable to muster up another equaliser. Aduriz tried his luck with a volley in the 74th minute but was met with a similar response to earlier: a superb reaction from Navas. From then on, the Whites displayed their solidity and left San Mamés with three hard-fought points. 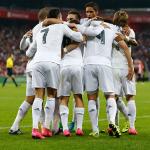