The team played seven matches and won the International Champions Cup in both Australia and China.
Real Madrid wrapped up the 2015-16 preseason tour in Norway, having played matches on three different continents. The Whites got things underway in Oceania, then flew to Asia before returning to Europe to contest the Audi Cup in Munich. The final friendly of the tour took place in Oslo.

Australia
The first stop was the Melbourne Cricket Ground, where they were crowned winners of the International Champions Cup Australia. Rafa Benítez's charges drew their first game against Roma (0-0), but the Italian side came out on top in the subsequent penalty shoot-out. In their second match, Madrid defeated Manchester City (1-4).

China
After their stay in Oceania, Real Madrid headed to China to play two games in the International Champions Cup held in the country. The first match against Inter Milan ended with a 0-3 win for the Whites at Tianhe Stadium in Guangzhou.

In their final act in China, Real Madrid drew nil-nil with AC Milan but won the trophy on penalties. The clash took place in the Shanghai Stadium.

Audi Cup
The team took part in the Audi Cup along with Bayern Munich, AC Milan and Tottenham. The Whites won the semi-final 2-0 with goals from James and Bale. In the final an 88th-minute goal gave Bayern the victory (0-1).

A game against Valerenga in Oslo
Following the Audi Cup, Real Madrid travelled to Norway to play against Valerenga in the Ullevaal Stadium in Olso. The Whites were far more superior to their rivals but were unlucky in front of goal and closed out the preseason tour with a scoreless draw. 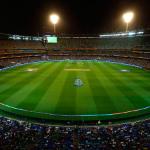