Having made his way through the ranks at the club, he returns to the Whites with ample international experience under his belt as well as a long list of titles that includes Champions League, Club World Cup, European Super Cup and La Liga trophies.
Rafael Benítez Maudes (16/04/1960, Madrid) is the new Real Madrid coach. The White club's latest project will be managed by a man who embodies success, experience and the Real Madrid spirit. Joining from Napoli, the 55-year-old has won everything on the international stage. A Champions League, a Club World Cup, a European Super Cup and two Europa League titles stand proudly in his extensive collection of trophies, which also includes 2 La Liga titles.

Well used to the pressures involved with managing big teams in Spain, Italy and England, he is the only Spanish coach to have reached 100 games in the European Cup. A methodical tactician, tireless worker and footballing scholar, Benítez is one of the greatest coaches on the global stage.

Madridista
While his achievements speak for themselves, so too does his knowledge of the club and the values associated with Real Madrid. Benítez is a home-grown talent. After making his way through the Real Madrid youth ranks between 13 and 20 years of age, he got his coaching career underway at the Whites' academy. For nine seasons he trained various youth teams, eventually taking the reins of Castilla and then becoming the second in command of the first team, in the 93-94 season.

He left Real Madrid in 1995 and continued his coaching career with Valladolid, Osasuna and Extremadura. After gaining promotion to the Spanish topflight with Tenerife, he signed for Valencia in 2001. During his three years with the club he won two La Liga titles and one Europa League.

The Champions League
He took charge of Liverpool in the summer of 2004 and the team were crowned European champions during his first year at the club. He was at the helm for six seasons and also picked up a European Super Cup, a Community Shield and an FA Cup. Additionally, he was named UEFA Manager of the Year in 2004 and 2005. His next project was at Inter Milan, where he won the Club World Cup and the Italian Super Cup.

Titles during his last three seasons
He made his way back to England in 2012, this time to take over at Chelsea. And once again he lifted a continental title during his first season in charge: the Europa League. His last job was at Napoli, with whom he won the Cup and the Italian Super Cup during his two seasons with the club. With his status among the elite managers cemented, Benítez now makes his return to Real Madrid with the objective of adding more silverware to the world's most lauded club. 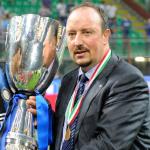