Rudy (21 points) and a great fourth quarter performance by Llull, in which he scored four three-pointers, finished off the challenge posed by Valencia Basket.

76
Real Madrid have started the 2014-15 season by reaching the final of the Endesa Super Cup. The Whites will battle it out for their third consecutive title in the competition after overcoming Valencia Basket in an even semi-final clash. Any doubts surrounding the team, which only had three days to prepare for the tournament, were quashed with a great performance from the Madrid players, led by Rudy (21 points) and Llull, who had an incredible fourth quarter in which he notched up four three-pointers.

Laso's men, with Rivers and Nocioni coming into the starting five as new editions alongside Llull, Rudy and Bourousis, looked like a team that had lacked time to gel properly, committing uncharacteristic errors.

Things were completely different for the opposing players at the start of the game, and they were able to dictate the tempo of the encounter while accumulating points on the scoreboard from the get go with all the players getting in on the action. Van Rossom (6) and Aguilar (5) were the biggest threats under the hoop. Real Madrid, first through Rudy and Rivers, both of whom racked up six points a piece, as well as a good spell from Mejri afterwards, were able to stay in the fight at the end of the first quarter (19-26, min.10).

Laso finds the key
After a few changes (he had used all his players by the 15’ except for Sergio Rodríguez), Laso finally had a more aggressive and intense defence on the court. Maciulis was the man who began to turn things around and livened up the Madrid offence, which went on a 12-5 run to level matters 31-31 at the halfway point of the second quarter. Valencia Basket were not as at ease as they were at the beginning of the match but thanks to some hard work from Harangody, Sato and Lishchuk, in terms of winning offensive rebounds, as well as points from Lucic and Loncar, they were able to just about lead the scoreboard (35-41, min. 18).

Rudy's return before the halftime break proved to be a pivotal moment in the match. Between the omnipresent Balearic forward and an inspired Nocioni in the number 4 position (his six points in a row before the end of the second quarter equalled the tie 43-43), the team was able to turn the score around. Things culminated in a Real Madrid fightback that saw the team record their largest lead of the night up until that point with two consecutive three-pointers from the Majorcan (56-49, min. 25). However, Perasovic's men kept their cool and made the most of the situation when the Whites tempo dropped in order to draw level (58-58, min. 29).

Llull, Llull, Llull!!!
It remained a close affair throughout a fourth quarter full of intensity. Both sides took out their big guns. First went Valencia Basket with two three-pointers from Van Rossom and a number of points from Loncar (62-64), but it was an incredible Llull performance that decided the match. His three three-pointers along with Rudy's in the space of just two minutes sealed things for Madrid, giving the team a +6 advantage with only three minutes until the buzzer. Reyes took it upon himself to ensure the victory and once again Llull was at hand with another three-pointer to put the cherry on top of a great night and secure Real Madrid's passage to the final (89-76, min. 40). 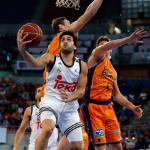