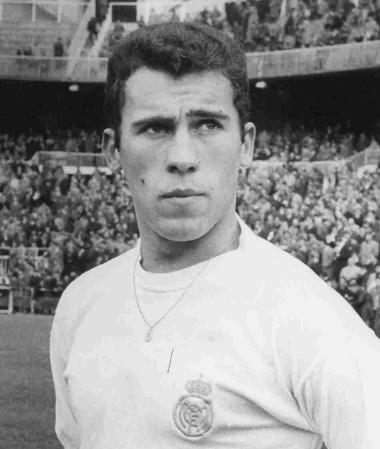 He was the king of the right wing and an artist who saw football as a show. When Santiago Bernabéu set eyes on him, he didn’t stop until he signed him in 1962. His pace and skill amazed both the national and the international football world.

Amancio was the star of the Deportivo de La Coruña team that won promotion to the First Division in 1959, and arrived at Real Madrid when they were in a period of transition. The Whites had just proven themselves to be the Kings of Europe by winning five consecutive European Cups at the end of the 1950s. However, with the retirement of some of the heroes of that side, the club needed to put together another winning team and so they signed the Galician winger as well as players like Zoco or Muller.

In his first season he won the league title and then came a succession of other honours which was crowned by the European Cup in 1966 which they won in the Heysel Stadium in Brussels against Partizan Belgrade. The game started badly with a goal for the Yugoslavian team, but goals from Amancio and Serena made Real Madrid the champions of Europe.

He had also won the European Championship with Spain in 1964 which was the first title for the national team. Curiously enough, Amancio won this title at ‘home’ in the Santiago Bernabéu in the final against the Soviet Union. With the Galician starring on the wing and a goal from Marcelino, Spain earned an unforgettable victory.

The legacy of a golden generation

Amancio is also considered to be the man who discovered the ‘Quinta del Buitre’ (The Vulture Squadron’). In his period as the reserve team coach, the Galician led this exceptionally talented generation of players to a real achievement for the club, the Second Division Championship won by Castilla. This was just the start of a new golden era for the Whites.

His successful stint at Castilla and his discovery of Butragueño, Martín Vázquez, Sanchís, Pardeza and Míchel gave him the chance to coach the first team for seven months in the 1984-1985 season and he laid the foundations for the success achieved later by Luis Molowny.

After leaving his job as coach, Amancio carried on working for the club in different jobs. Firstly, he worked as a scout, then as a member of the board under Florentino Pérez and finally as one the organizers of the Real Madrid Centenary.