Victory slips away from Madrid in Istanbul 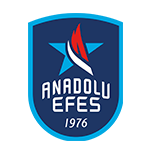 Laso's charges lost the game against Anadolu Efes in the final seconds in a contest where they led for 37 minutes.

Real Madrid was downed by Anadolu Efes in Istanbul in a thrilling contest that was decided in the dying seconds, in which we had the possession to have forced overtime. Our team, which was weakened by injuries, deserved far more after having dominated for 37 minutes with some fine play in offense, however they were undone in the final stages against a side who desperately needed the win to keep their playoff hopes alive. Pablo Laso’s lot have already booked their spot in the playoffs and they defended the +12 basket average from the first half of the season and their destiny is in their own hands to secure home-court advantage in the playoffs. Deck, who posted 23 points, 10 rebounds and a PIR of 31, and Yabusele, with 20 and 24, were the standout performers for the madridistas, who would clinch a top-four finish with victory in one of the remaining three rounds.

The Sinan Erdem was packed to the rafters in one of the biggest games on the European stage. Real Madrid didn’t allow themselves to be intimidated by the atmosphere and came out looking intent against a Anadolu Efes that went all out from the off, with Larkin and Micic in the starting quartet. The guests dominated the opening exchanges thanks to a defense featuring continuous changes with Tavares an intimidating presence and some very fluid attacking play in which all five players contributed, paced by Williams-Goss (5 points and 3 assists) and an effective Poirier (6). Ataman’s charges turned to Micic and Moerman to keep pace with the madridistas’ high tempo as the visitors kept themselves ahead throughout all of the first quarter with a lead of up to seven points (19-21, min. 10).

Solid & focused
Madrid remained solid and didn’t allow the hosts to build on their surge. In the first half of the second quarter, the madridistas grew even more in the game with a flawless defense, superiority on the rebounds that allowed the team to run, and an offensive masterclass to overcome the Turks’ defensive system. Rudy, with two treys, Poirier with some fine minutes under both baskets, Yabusele and Deck, who was unstoppable on penetrations, put Laso’s men 13 points to the good on 16’ (31-44). However, as the quarter wore on came a series of fouls and they soon entered in the bonus penalty situation. Anadolu Efes, who continued to be led by Micic, came back on the offensive and reduced the arrears with a 11-0 run with a minute to go until the break. However, Madrid was very much in the game, with just one turnover at the break and produced a resounding response. The team regained form in offense and ended the stanza with 30 of the 51 points posted in the first half following a 7-2 run in which Yabusele, who had been our team’s standout performer so far with 14 points and a PIR of 20, starred (44-51, min. 20).

Video.93-90: Victory slips away from Madrid in Istanbul

Anadolu Efes began the second half with more energy and displayed all of its offensive potency. Pleiss, Micic and Larkin starred in the scoring stakes as they tried to restore parity. However, Madrid was having none of it and gave the hosts a taste of their own medicine to turn the third stanza into an exchange of extremely high scoring runs (28 apiece), in which Hanga and Yabusele, who dazzled from the three-point line, were key to keeping our team ahead (72-79, min. 30).

Game comes down to final play
The battle kept up its relentless pace until the end. Anadolu Efes pushed even hard and took Madrid to the limit with Moerman in inspired form on treys and Micic showcasing all of his ability. Deck kept Madrid in contention, but the Turks managed to hit the front for the first time in the game with 1:43 remaining to make it 93-90. There were no further points forthcoming, although Madrid had the final possession to have forced overtime, but they failed to post points from the triple line and the win went to the hosts. Laso’s men have another shot at securing home-court advantage in 48 hours’ time, when they travel to Tel Aviv (Thursday, 8:05pm CET).