Laso's men head to La Fonteta in search of the second and definitive win in the playoff semis (9:15pm CET).
Real Madrid is in action tonight in Valencia in the second game of the Endesa League semi-final (9:15pm CET). Pablo Laso's men will be looking to claim victory to book a place in the final, without the series going to a third match. The madridistas head into the match-up following Sunday's excellent performance against the Valencians at the WiZink Center (81-70).

The team will have to put in an even bigger shift on a floor where it tasted victory in the Regular Season. Indeed, Real Madrid has emerged victorious in each of its last three league trips to La Fontenta. The guests will also be looking to extend their impressive unbeaten streak in road trips (19 wins on the spin).

Real Madrid will have to perform as it has done in the last three playoff games. The Whites will have to stop Valencia Basket's inside game, where Dubljevic (average of 11.5 points) and Tobey (8.5) are the major threats. Meanwhile, Laso's troops will be aiming to reproduce the same levels of dominance in the rebound stakes as in the first match-up, when the Whites posted 52 rebounds to Valencia's 33.

Statistics
Despite having to deal with several absentees, Real Madrid is performing excellently in offense (average of 88.3 points in the playoffs). Carroll and Causeur are pacing the attack with 11.2 and 10.6 points respectively and will be looking for more of the same in Valencia. Another of the game's main men will be Taylor, who will tonight make his 400th appearance for Real Madrid. 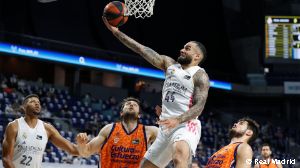