Marta Cardona and Ubogagu were the goalscorers in the team's fourth successive win at Real Madrid City.
Ciudad Real Madrid

0
Real Madrid picked up their fourth consecutive home win, beating EDF Logroño in the postponed matchday 16 league encounter. Marta Cardona opened the scoring just three minutes before the break, before Ubogagu made sure of the points with 87 on the clock. The victory sees the madridistas take back their place in the Champions League qualification spots.

The early chances all fell to David Aznar's team, first when Jessica Martínez had the ball in the opposition net, only for the referee to rule it out for offside. Cardona then tried her luck 15 minutes on with a long-range strike which flew just wide of the target. Misa's first real save came on 34’, when she kept out Judith's cross-come-shot with a fine diving stop. The hosts got the reward their efforts merited just before the half-time whistle, when Jessica Martínez shot after being set up by Jakobsson - the defender got in the way of the initial effort but Cardona was on hand to pounce in the box and make it 1-0.

Madrid make sure
Ten minutes into the second half, Jakobsson struck a potent drive from the right flank which flew just wide of the target. The Swedish ace was looking lively, trying her luck once again with just over an hour on the clock. Her shot came back off a visiting defender and fell to Kaci, who was just unable to stop it going out of play. Logroño's final opportunity fell at the boots of Ida, whose strike from outside the box sailed over the crossbar. Ubogagu then made sure of all three points for the home side with just three minutes left to play. The striker latched on to an Asllani through ball to beat the goalkeeper and make it 2-0. 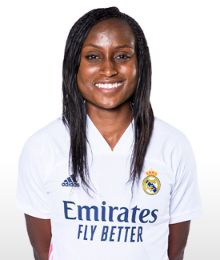 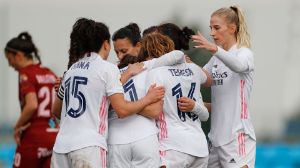 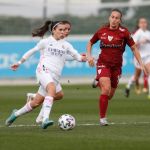