Goals from Benzema and Mendy secured the spoils for Zidane's men at the Alfredo Di Stéfano.
Alfredo di Stéfano

0
Real Madrid overcame Getafe in the sides' rearranged LaLiga Matchday 1 meeting, with the hosts claiming victory in the second half, in which Karim Benzema and Ferland Mendy got their names on the scoresheet as Zinedine Zidane's charges converted their dominance into goals. The Whites, who came into the contest with nine players unavailable, looked solid right from the get-go and produced all of the chances in the opening period. With just five minutes on the clock, Luka Modrić sent over a free-kick and following a series of ricochets, Casemiro fired in an effort from inside the six-yard box that was cleared away by Sofian Chakla.

The clearest opening of the first half came nine minutes later, when Modrić swung over a corner and a bullet Benzema header crashed against the crossbar. Getafe barely had a sighting of Thibaut Courtois's goal as Real Madrid continued to probe in search of an opener. Marvin looked to catch Getafe out on 28', but his cross-shot was gathered in by David Soria, who was called into action again in the 37th minute, when he palmed a left-footed Modrić strike behind for a corner.

The second half began with the hosts on the front foot, with Marco Asensio playing a defence-splitting pass to Benzema, but the Frenchman’s low finish was finger-tipped away by Soria on 49’. But the striker’s fortunes changed 11 minutes later when Vinicius Jr. curled in a cross from the right and the goal-machine climbed high to head home and break the deadlock.

The hosts’ best spell
The goal spurred Madrid on and seven minutes later they doubled their lead. Mendy drove forward and laid the ball off to Marcelo down the left wing and the Brazilian curled in a low cross and the Frenchman turned the ball in at full stretch to seal the three points for the hosts, as the Whites remained solid at the back and didn’t allow Getafe the chance to get near their goal. Next up, Madrid face Valencia at the Alfredo Di Stéfano stadium on Sunday. 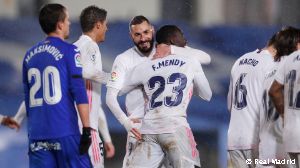 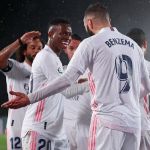