Valverde's strike came before Ramos and Modric goals in a superb second half to give Real Madrid all three points at Camp Nou and put them top of LaLiga.
Camp Nou

3
Real Madrid ran out well-deserved winners in the first Clásico of the season. Zidane's men went ahead thanks to a Valverde goal in a pulsating first half which ended all square but made sure of the win with a sublime second-half performance that saw Sergio Ramos and Modric also find the net. The madridistas made no mistake with their first real chance of the match. It was a picture-perfect move consisting of 24 successive passes and finished when Benzema threaded a slide-rule pass to Valverde, who smashed past Neto and into the top corner with just six minutes gone.

The azulgranas' response took no time at all and the game was level almost immediately. Jordi Alba crossed from the left and Ansu Fati nipped in to turn home first time past Courtois. There were two goals on the board and not even ten minutes had gone by, but the scoreline remained the same until the break, despite chances to break the deadlock. Messi could have put his side ahead on 23’, but Courtois did brilliantly to keep out his right-footed effort. One minute later and the madridistas crafted a swift counter attack which ended with Benzema forcing Neto into an impressive stop.

The second half began with two chances for Barcelona. Ansu Fati fizzed the ball across goal and narrowly missed in the 52nd minute, before Coutinho headed just wide two minutes later. Real Madrid then had a free-kick out wide. Kroos swung the ball into the box and Sergio Ramos was pulled back by Lenglet as he went up for a header. The referee was summoned by the VAR to look at the incident on the monitor and subsequently awarded a penalty. Ramos once again showed composure from the penalty-spot to put the visitors ahead in the 62nd minute.

A team effort
With half an hour left on the clock, Real Madrid refused to just sit back and defend their lead, and continued to apply pressure up the other end. Apart from the odd attack from set-pieces, Zidane's side barely conceded Barcelona any chances to draw level, whilst creating some good openings themselves. They almost scored a third on 86 minutes when Kroos was denied with a double save by Neto and a back-post volley by Ramos was then kept out by the Barça keeper moments later. In injury time, Modric picked up a rebound after a Vinicius Jr. shot was blocked by Neto. The midfielder cut inside and finished superbly with the outside of his right boot as Real Madrid claimed victory in the first Clásico of the season and move to the top of the table. 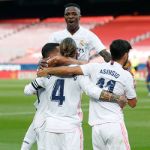