Real Madrid recorded the most wins, conceded the fewest goals, were the division's best travellers and the only team to remain unbeaten on home soil.
Real Madrid lifted the club's 34th LaLiga title, a league crown that, in the words of president Florentino Pérez, “will always be the toughest title won at the toughest time”. Zinedine Zidane's charges overcame all of the obstacles in their path and put together a stunning run of results in the post-confinement period, recording 10 wins on the bounce and a draw.

However, in addition to picking up 31 of the last 33 available points, Real Madrid ended the LaLiga campaign at the summit of several standings. Not only were the Whites the team to amass the highest points tally, they also registered the most wins (26), lost the fewest games (three) and conceded the fewest goals (25), with this latter statistic representing an all-time club record for a 38-game season.

Madrid recorded clean sheets in half of the LaLiga outings (19), which matches the records from the 1986/87 and 1987/88 seasons, whilst Thibaut
Courtois landed the Zamora Trophy with a coefficient of 0.59 (20 goals in 34 games).

One statistic that sums up the excellent campaign enjoyed by Zidane's men is the fact that the madridistas were undefeated in their 19 home games (13 at the Santiago Bernabeu and six at the Alfredo Di Stéfano). The Whites were the only LaLiga team to achieve such a feat.

Best travellers
The team's record on the road is also worthy of note. Real Madrid were the division's best travellers (picking up 38 points away from home), won the most games on opposition territory (11) and conceded the fewest goals (14). These certainly are statistics befitting a champion.

Twenty-one goalscorers
Another statistic that speaks volumes of this Real Madrid side is that 21 players chipped in with goals, which is a LaLiga record so far this century. In the individual scoring stakes, Sergio Ramos weighed in with 11 goals to become the highest-scoring defender in LaLiga history. Meanwhile, Karim Benzema topped the side's scoring charts (21 goals) and was also the player to find the net in the most league games (17) as well as finishing in joint-first place for the player to have opened the scoring in the most contests (10 along with Raúl García). Meanwhile, his backheel assist at Cornellà is one that'll forever remain etched in the collective memory. 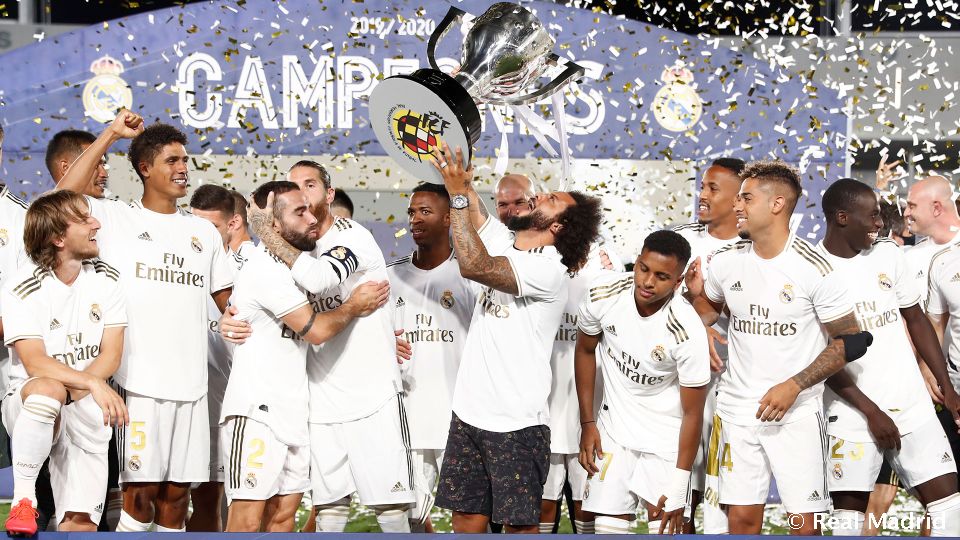