This side of the stadium has also seen changes made to the towers for the construction of two new roof supports.
The Santiago Bernabéu of the 21st century will not feature the adjoining building on calle Padre Damián, which was home to the institutional offices and the Adidas store. In its place, a new building that will run along the whole side of the stadium and reach up to the new stand, which will be situated on what's currently the highest tier. The new structure will be far taller, with 10 functional above-ground floors and will also feature three floors of underground parking. It will be an interior building, given that it will be incorporated within the Santiago Bernabéu, which will boast an improved commercial and catering offering.

On this side of the stadium, progress has been made on the installation of other structural roof supports. This has seen the two towers on calle Padre Damián torn down and work has begun on the foundations, which will be reinforced by a metal structure and concrete cladding. 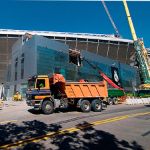