He served as Real Madrid president for over three decades and turned the club into a leading name in the sporting world.
On 2 June 1978, Santiago Bernabéu passed away in Madrid at the age of 82. As a former player, coach, board member and president, he was a key figure within Real Madrid's history. The major feat of his tenure as president was the club's significant growth, both in institutional and sporting terms. Amongst the initiatives he led was the construction of the Nuevo Chamartín, opened in 1947 and renamed in his honour years later.

Bernabéu was born in Almansa (Albacete) on 8 June 1895 and was named Real Madrid president in 1943. Up until his passing, the club's football team lifted six European Cups (a competition he was involved in creating), an Intercontinental Cup, two Latin Cups, 16 LaLiga titles and six Spanish Cups. 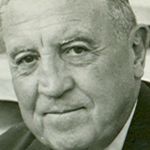