Florentino Pérez congratulated the players and the coaching staff for winning the 28th Cup.
Once the Cup was presented at the Martin Carpena, the celebrations moved on to the changing rooms of the Malaga court. The president, Florentino Pérez, congratulated the team for the title that they won. The players and the coaching staff celebrated the second title of the season in style and took photos with the 28th cup in the history of the club. 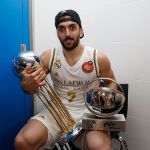