2
Real Madrid only picked up one point against Celta, but they keep hold of the lead in LaLiga. Goals from Kroos and Ramos, from the penalty spot, turned the game around after an early goal from Smolov, but Santi Mina scored in the 86th minute to make it 2-2. Everything went against them almost at the start. Iago Aspas set up Smolov in the 7th minute, who beat Courtois in the on-on-one. From then on, until almost the end of the first half, it was all Real Madrid, who did not deserve to go in at the break behind.

Only three minutes after conceding the goal, Hazard crossed and Casemiro's header went narrowly wide.  The Brazilian was again involved in the 17th minute. His powerful long-range shot hit the bar. The minutes passed and Real Madrid did all but score. In the 40th minute, Benzema left the ball to Hazard, the Belgian crossed with his left foot and Bale's shot from inside the box went over. On the stroke of half-time, Courtois was called in to action. Olaza took a corner and Aidoo Jr.'s header was kept out by the Belgian's at full stretch.

Real Madrid flew out the blocks after the break, and with 49 minutes on the clock, Ramos had the ball in the net but referee Alberola Rojas ruled the captain was in an offside position and chalked the goal off. Just three minutes later, and the equaliser did materialise. Marcelo pulled the ball back into the box and Kroos whipped it beautifully past the helpless Rubén Blanco. There was more than half-an-hour left to play and Real Madrid were showing no signs of letting up in search of more goals. Valverde tried his luck on 61’, but his left-footed strike ended up in the visiting keeper’s gloves.

To the end
Another three minutes went by before the Whites got their noses in front for the first time in the game. The goal was the result of a spot-kick that came when Hazard’s determination to chase down what looked like a lost ball was rewarded. The Belgian ace was upended in the box by Rubén Blanco and Ramos, flawless from 12 yards, made it 2-1. Real Madrid had done all the hard work now, but Santi Mina got one back on 86 minutes and despite the madridistas having a great chance to win it through Benzema in injury time, the visiting goalkeeper stood strong and made sure the LaLiga leaders would have to settle for a share of the points. 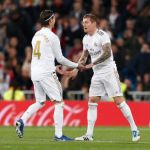