The Frenchman was stood on by Lenglet and two minutes later had his shirt pulled by Ivan Rakitic.
Raphaël Varane was involved in two controversial moments in el Clásico at the Camp Nou. The Frenhcman could have had two penalties in the first half but Hernández Hernández did not give wither of them. On minute 17, the madridista went to head a corner before Lenglet stood on his thigh muscle in the area, but neither the referee nor VAR (where De Burgos Bengoetxea was in charge) deemed it a penalty.

Two minutes later and following another corner, the central defender had his shirt pulled by Ivan Rakitic, which saw him end up on the ground in the penalty area. However, once again, neither the referee or the VAR system decided to award the penalty. 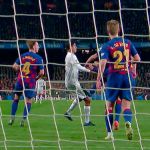