0
Real Madrid were unable to start the Champions League 2019/20 campaign on a positive footing. The Whites lost away from home against PSG after a Di María brace in the first half was followed by a Meunier strike in time added-on. Zidane's team were unable to convert the chances they had and VAR ruled out two goals. The game began with both sides looking to impose themselves, but now clear opportunities arose. The first one which came along quickly resulted in PSG going 1-0 up, when Di María finished a swift move down the left with a first-time strike inside the area (14’).

Two minutes later, Hazard, making his first appearance from the start, was inches away from netting the equaliser but his effort skimmed just the wrong side of the post. The madridistas began to gain a foothold in the game as time wore on and a fine piece of play by Benzema laid on James, but his attempt flew over the bar (20’). Bale also came close to a leveller with his well-struck free-kick but again he just failed to find the target (32’). In the next move, Di María made it two with a curling strike from the edge of the box. On 35', Bale got one back for Real Madrid but the referee went to VAR and ruled the goal out for a handball by the Welshman. Bale then enjoyed the final chance before the break but his shot was just wide once more.

The Whites came out looking to reduce the deficit, although they weren't finding it easy to test Keylor Navas in the home side's goal. At the other end, PSG were waiting for the moment to kill off the match, with Di María heavily involved on two occasions. First, the Argentine lifted the ball too high when up against Courtois, before he set up Sarabia, who shot wide.

With twenty minutes left, Zidane brought on Jović and Lucas Vázquez. In the 76th minute, the referee ruled out a Benzema goal after Lucas Vázquez was adjudged to have been offside. Shorty after, the French forward headed a cross just over. The last Real Madrid change saw Vinicius enter the fray as they continued to look for a breakthrough, but it was PSG who delivered the killer blow as Meunier made it 3-0 in the added time. 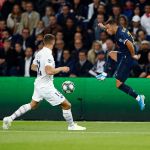