The Argentine guard was named the MVP and top scorer in the last edition of the Endesa League.
Nicolás Laprovittola (01/31/1990, Morón, Argentina) will strengthen the Real Madrid squad during the next two seasons. The Argentine guard stood out in the last ACB league season. He was MVP of the League averaging 17.2 points, 6.4 assists and 2.5 rebounds with a PIR of 17.2, top scorer in the championship and member of the best quintet.

Full international with Argentina, Laprovittola is pure talent and technique, a guard with a lot of offensive resources and great vision of the game. The Argentine arrives at Real Madrid in the best form of his career after playing in teams such as San Antonio Spurs in the NBA.

After playing for six seasons at Atlético Lanús, he made the leap to Flamengo. There he began to reap collective and individual successes, becoming League champion on two occasions as well as Liga de las Américas champion and the Intercontinental Cup winner against Maccabi (he was MVP of the tournament in 2014).

He changed continent with Lietuvos Rytas in the 2015/16 season. Since then, he has played in Spain, Russia and the United States. This season he left his mark on Joventut. He was the architect of thier qualification for the Copa del Rey and took the green team to the semifinals with a performance never seen before: 36 points, 7 rebounds, 4 assists and 50 PIR to defeat Baskonia in the quarterfinals.

Performances in the league such as 40 points and 7 triples against Gran Canaria, 32 against Estudiantes or 22, 11 assists and 41 PIR against Barcelona have led him to be named the MVP. Together with his compatriot Campazzo and Llull he will form one of the best base trios in Europe. 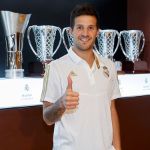