The US center averaged 14.2 points, 5 rebounds and 1.1 blocks in his debut EuroLeague season.
Jordan Mickey (09/07/1994, Dallas, United States) has secured a move to Real Madrid for the next two seasons. A center measuring in at 2.03 m and a highly versatile operator, the American boasts great athletic ability and talent at both ends of the court. In his debut campaign in Europe, during which he lined up for Khimki, he was amongst the leading inside players for average points scored per EuroLeague match (14.21). What's more, his 2.18 m stature makes him a fine blocker and at just 25 he has plenty of time in which for his game to develop.

His adaptation to European basketball has been both swift and seamless. He was the Russian team's second-highest points scorer in the EuroLeague, behind only Shved, with an average of 14.2 points (with a 57% success rate on two-pointers and 35% on treys), he also weighed in with 5 rebounds, 1.1 blocks (coming fifth in these standings, which were topped by his now-teammate Tavares) and a PIR of 15.4 from his 22 minutes on court. Mickey learned his trade at Louisiana State University, a breeding ground that also produced Shaquille O’Neal. Both players are the only two in the university's history to have exceeded 100 blocks in a season. In the NBA Development League he came top of the rankings in this department with an average of 3.9 per game.

Sublime performance at WiZink Center
Drafted in position 33 by the Boston Celtics in 2015, Real Madrid's latest recruit featured for both the NBA side and the NBDL's Maine Red Claws for two seasons, before making the move to the Miami Heat in the 2017/18 season. He then ventured into Europe last term, during which he produced two eye-catching displays against Real Madrid at the WiZink Center (12 points and 10 rebounds). The US center comes in to strengthen one of the strongest inside units within European basketball. 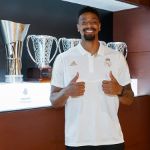