The Belgian forward joins the club after leading Chelsea to Europa League glory, in a final where he scored twice and set up another.
Eden Hazard (La Louvière, Belgium, 07-01-1991) is now a Real Madrid player. The club has acquired one of the best players in the world. The Belgian forward is 28 and joins from Chelsea, where he became known for his talent, attacking flair, assists and goals. His latest triumph with the English side was winning the Europa League 2018/19. In the final against Arsenal he scored twice and set up another, which led to him being named man of the match. Last summer he won the Silver Ball at the World Cup in Russia and this term h was named in the FIFA FIFPro World XI. He was in UEFA's team of the year 2018.

Making the difference in any attacking role, Hazard has world class technique, vision, dribbling, pace and finishing. These qualities saw him stand out in his seven years in England. Since arriving at Chelsea in 2012 he went on to win 2 Premier Leagues, 2 Europa Leagues, 1 FA Cup and 1 League Cup. This past season he played 52 games, netting 21 goals, and provided the most assists in the Premier League with a total of 15. England's PFA named him young player of the year in 2013/14, player of the year in 2014/15 and included him in the team of the year in four different seasons.

Star of the Russia World Cup
Hazard is one of the key success stories within the current Belgian national team. His first team debut came in 2008 at the age of 17. After featuring at the World Cup 2014 and Euro 2016, he was one of the stars of the last World Cup. In Russia he played six games, scored three goals and was named man of the match on three occasions as he led his country to their historic third place finish before being named the second-best player at the tournament, behind Modric.

Double in France
Before his successes for the national side and his time in the Premier League, Real Madrid's new star established himself in the French league. After playing at Belgian sides Royal Stade Brainois and Tubize, he joined the Lille youth team in 2005. His debut in the first team came in 2007/08 and a season later he was a key part of the squad. He made a crucial contribution as the team won their historic double in 2010/11, as they lifted both the French cup and league trophies. He stayed with Lille until the end of 2011/12. Whilst he was at Lille, France's Union of Professional Footballers named him young player of the year in 2009 and 2010 and player of the year in 2011 and 2012, as well as naming him in France's team of the year three times. 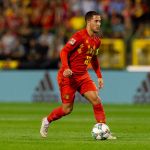