The captain became the league's all-time highest appearance-maker in the game against Unicaja (779).

Felipe Reyes is now the league's highest all-time appearance-maker across the ACB and National League eras after bringing up his 779th appearance against Unicaja and eclipsing Joan Creus's tally. This represents another landmark for Spanish basketball's Mr record breaker. The Real Madrid captain sat down with Realmadrid.com and Realmadrid TV to reflect on his career journey: "Being happy on and off the court and enjoying myself are the keys to continuing to perform at this level". 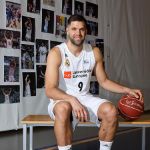