Modric put Madrid in the lead with a goal from outside the box and the Sevilla-born midfielder got the winning goal in the 88th minute.
Benito Villamarín

2
Real Madrid picked up a hard-fought three points at the Benito Villamarín. The Whites beat Betis 2-1 in the last game of the half of the season. Modric scored the first with a strike from outside the area that flew in to the top corner. Canales equalised with a goal awarded by VAR and Ceballos, with a direct free-kick, got the winning goal in the 88th minute. The second consecutive victory for the Whites who now switch their attention to the copa del rey round of 16 second leg.

Solari set out his team with the lines very close together, pressing Betis high up and keeping a high line at the back. Vinicius and Benzema created early chances after winning the ball back in dangerous areas and it wasn’t long until the opening goal came. With 13 minutes on the clock, a Carvajal shot was parried by Bartra to Modric who put away a left-footed shot first time from the edge of the area. The Croat, a specialist from outside the area, tried again shortly after but his effort went over.

Valverde chance
Real Madrid were set up well defensively, preventing Betis from creating any clear chances on Navas’ goal. The Whites were looking dangerous on the break and went looking for a second with fast transitions in to attack. With 30 minutes gone, Pau López kept out a Vinicius shot from inside the area. In another counterattack, the Brazilian, played in Valverde, who found himself one-on-one with the keeper but was unable to get his shot off. Betis pushed hard for an equaliser before the break with Canales having two chances. Firstly, from a free kick and then a shot across the keeper, but both were deflected behind. As a result of the good defending, Betis didn’t have one shot on target in the first half.


With the second half underway the Whites were hit with another setback. Benzema, who in the closing stages of the first half injured a finger on his right hand, gave way to Cristo. The hosts were now well and truly on the hunt for a draw. Canales was kept at bay by Navas after a shot from inside the area. Vinicius tried the very same for Real Madrid but the ball was collected by Pau López. Betis went on the attack yet again and on 60’, Guardado’s attempt just trickled wide.

Ceballos saves the day
The equaliser came on 68’ as Canales beat Navas. Initially the linesman called offside but the goal was given when the referee checked with VAR. Solari used up his last substitutes, bringing Ceballos and Brahim on for Reguilón and Valverde. With just ten minutes left, the game was wide open. Real Madrid kept plugging away in search of a winner and it came at long last. Ceballos fired in a free kick on 88’ to put the Whites second goal past Pau López. Real Madrid make the trip home, safe in the knowledge they have three valuable points in the bag. 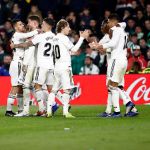