An Isco header clinched a point for the Whites in a game where they created enough chances to beat Athletic.
San Mamés

1
Real Madrid took a point at San Mamés in a game that saw them create enough to have taken far more. The intensity of the clash was evident from the off, and the first real opportunity presented itself just two minutes in. Bale whipped in a cross and Asensio quickly laid the ball off to Modric, but the Croatian's effort came back off Íñigo Martínez. Athletic reacted strongly though and created two chances in quick succession, but Williams' shot on 14' flew across goal before Courtois was alert to keep out Yuri with 23 on the clock.

Half-an-hour into the match and Asensio tried his luck with a beautifully curled attempt, but Unai Simón kept him out with an outstretched hand. Just two minutes later though, the first goal did arrive, as De Marcos got in behind the defence and Muniain was on hand to poke the ball over the line. Real Madrid would now have to come from behind, and they came close to doing just that before the break. Modric unleashed a left-footed strike from the edge of the area, but the ball struck Yerai and Unai Simón reacted quickly to make another smart stop. The home side's goalkeeper was in inspired form, keeping his side in the game time and again.


At the half-time interval, Lopetegui introduced Casemiro in place of Dani Ceballos, before bringing Isco on for Luka Modric in the 60th minute. Madrid had half an hour in which to stage a comeback and they came a whisker away from restoring parity courtesy of a Bale free-kick from range. Unai Simón failed to gather the Welshman's effort in, but the hosts' custodian reacted quickly to save Sergio Ramos's effort from the rebound. Four minutes later, Bale was again in the thick of the action as he sent over a right-footed cross that was met by Isco, who caught everyone by surprise as he ghosted into the box and levelled terms with a textbook glancing header.

Further chances
Whilst the scoreboard suggested that the contest was finely balanced, events on the field told a different story, where the visitors looked the more likely to go on and take victory. Madrid came close to forging ahead when Ramos unleashed a sumptuous pass from his own half towards Marco Asensio. The Majorca-born attacker exquisitely brought the ball under his spell and bore down on Simón, who got his body in the way to prevent a second Madrid goal. From then on in, Madrid poured forward in search of victory, but the winning goal ultimately proved elusive. 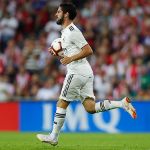