The players were involved in an act in which they unveiled the new kit, which is coral in colour and made of plastic intercepted from the ocean.
Real Madrid and Adidas have presented the third jersey that the European champion will wear in the 2018/19 season. The squad starred in the presentation, which took place at Hunters Point, in New York, and was attended by the director of Institutional Relations, Emilio Butragueño, and Arbeloa, club ambassador. The new kit will be released in the last game of the tour, which see the Whites face Roma in New Jersey.

Made with plastics collected from the ocean, the new shirt is coral in color, representing the oceanic coral that Adidas and Parley For The Oceans seek to protect. An association that strives to prevent plastic waste from contaminating the oceans, transforming them into high-performance sports garments.

During the event, the players posed with the new shirt and took part in different activities with children. In addition, Bale, Benzema, Kroos and Nacho talked on the stage accompanied by Arbeloa. "The work they do to help the planet is very important. Parley does a great job to have a better life for everyone. The team is enjoying the pre-season and are keen to get started", said Bale. "I really like the shirt and the colour. I hope it brings us luck and we can win titles in it and score lots of goals", added Benzema.

Kroos spoke, saying: "The Champions League is always special for us. The nights at the Bernabéu are different and we’ve won three consecutive titles. It's good to connect Parley with football and the best club in the world. I like the color and it’s for a good cause". And, finally, Nacho commented: "Madrid is the most demanding club and we are used to that and prepared to continue doing well and winning competitions".

Butragueño: "We are pioneers in this initiative"
"We are pioneers in this initiative. In November 2016 we started the agreement playing with a Parley shirt and the response from the fans and players was fantastic. This time we are going to wear the shirt throughout the season and we feel like doing it. We have to be switched on and aware of this problem. We’re very happy to be in the United States and we want to thank our fans. We feel at home here". 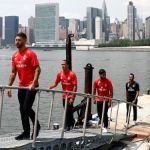 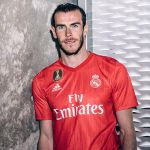