The 23-year-old forward has won the Argentine League title and the division's MVP award, whilst also having scooped the Americas League MVP.
Gabriel Deck (08/02/1995, Colonia Dora, Argentina) has joined Real Madrid in a deal which will see him bolster the team's roster for the next three seasons. Pablo Laso's side have secured the services of Argentine basketball's emerging star, a forward measuring in at 1.98m who represents both the present and future of his nation's basketball. Aged 23, last season he was the leading light for a San Lorenzo de Almagro team that captured a third successive league crown, in which Deck averaged 19.1 points, five rebounds and a PIR of 19.9. Meanwhile, San Lorenzo also claimed the Americas League title, with Madrid's latest recruit posting an average of 19.6 points, 6.1 rebounds and a PIR of 22.9. In both competitions he was honoured with the MVP accolade.

Madrid's new man is the best example of the generational shift that the greatest Argentine national team of all time, featuring Ginobili and co., has undergone. Meanwhile, Deck is also set to bring back memories of a player who left his mark at Real Madrit: his compatriot Andrés Nocioni. Deck, who is perfectly comfortable operating as a power forward, boasts versatility, a fine physique, good jumping ability, talent and, much like Chapu, offers great character and spirit out on the court.

He made his professional debut at just 14 in the Argentine League with Quimsa, winning the South American Basketball League (2009) and one League title (2015). He signed for San Lorenzo de Almagro in the 2016/17 campaign, picking up another League title, and also being named MVP. His real standout season, though, came in 2017/18, as he shone both on a collective and an individual level, leading his team to another League title, beating San Marcos 4-2 in the final; in the sixth game of the series, Deck notched 21 points and 13 rebounds.

He was named MVP for the Regular Season and the final, in latter averaging 15.8 points and 8.2 rebounds; best domestic player, best under-23 player, and won his place in the season's best-five. He also got his hands on the Americas League title, also picking up the MVP award with another double-double in the final against Mogi Das Cruces (22 points and 10 rebounds). At 23 years of age, Deck is a key part of the Argentina national side. He has spent time in every stage of the youth ranks, and in 2012 was the top scorer at the Under-17 World Cup (21.7 points) as well as sealing his place in the best five. He made his full national debut on the 31st of August 2015. 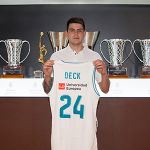